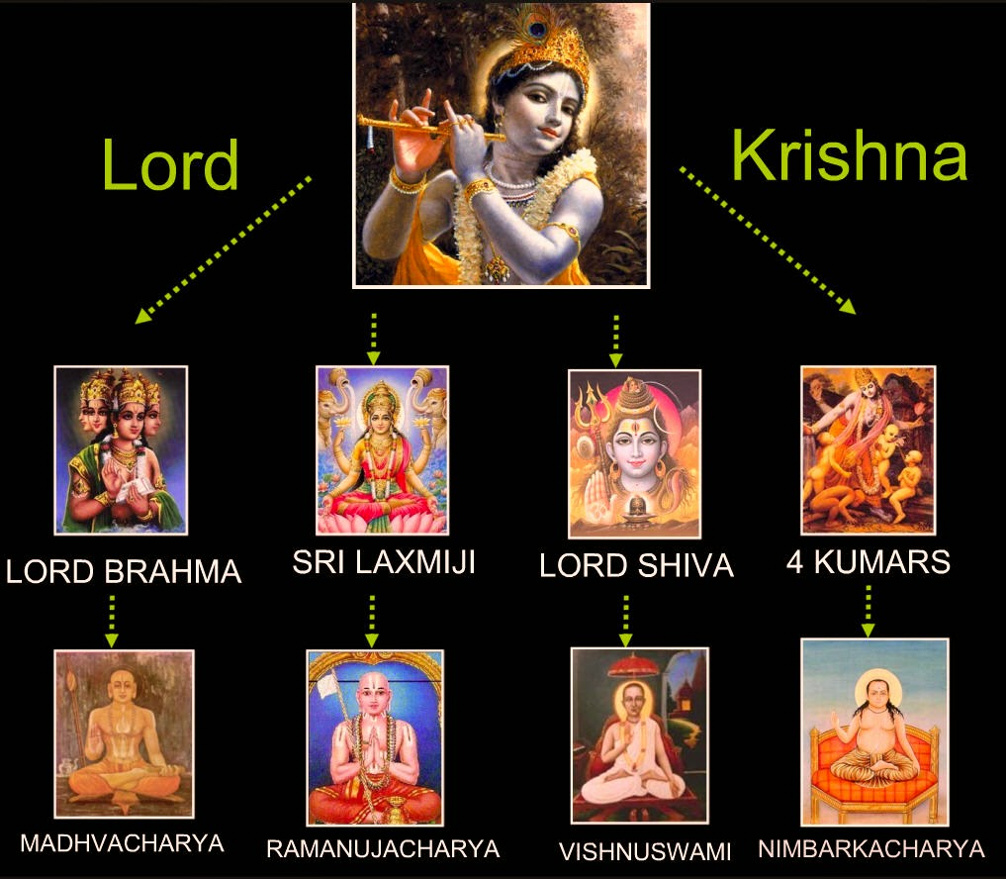 Without Guru, there is no way of knowing God. This is the reason even when Sri Krishna comes down to this world, He takes a guru to show us as the example.
‍
However, unfortunately in this age of Kali, this world is flooded with false gurus who have their own agenda based on self interest. But if you have a honest desire to surrender to a Guru and receive instructions, Sri Krishna says that He will send an appropriate guru. The guru we get depends upon our genuine interest. If we have sincere devotion to Krishna, then Krishna sends a real guru. We don't have to look for a guru, but guru appears when a student becomes ready!
‍
One may ask that why many people do not want to surrender to a guru? The reason is their EGO. So, ego plays an important role in accepting a spiritual master. They may ask, 'Why should I need a Guru?" Can't I go myself? The answer is that because we have fallen down to this material world, we need help from some one who is positioned in the spiritual world. For learning music, we look for a good teacher. To learn tennis, we look for a teacher. For medical problems, we go for a doctor, sometime even for second opinion. But when it comes down to spirituality, they say that they can do by themselves. Unfortunately, self service does not work in this case. How many of us learned our ABCD by ourselves. How can a frog fallen deep into a well jump out by itself?
‍
We may wonder as why there is a middle man necessary to worship the Lord. We may even wonder if this system had been invented for the sake of some sect. But the fact is that every parampara, every acharya, and every sastra proclaims that one should need a guru. Lord Krishna explicitely says that if any worship is done to Him without first worshipping one's guru is not accepted by the Lord.
‍
Prathaman tu gurum pujyam
Tatas caiva mamarcanam
Kurvan siddhim avapnoti hy
Anyatha nisphalam bhavet       (Hari Bhakti Vilasa 4.344)

"One must always worship one's guru first and only then worship Me (Lord Krishna). When one follows this gets perfection, but if one neglects this process, everything will be fruitless."
‍
Also accepting a guru is not just a formal thing. In many cases in the history, a formal initiation was not even performed. When one genuinly surrenders and accepts a guru with full heart, that is the real initiation.
‍
When one accepts a guru, he is called a dvija - second born. Our first birth is from our parents, and the second birth is by initiation from a guru. Dvija is second born. A bird is second born, as its first birth is an egg, and the second birth is its hatching as a bird. According to the sastras, by birth every one is a sudra. 'Janma Jayate Sudrah'. So, brahmanic qualification is never by birth.
‍
Even of one was born in a family of dog eater, if he becomes qualified he is a brahmana and eligible to read the Vedas. he is thus called a Vipra. Then when he accepts a guru, he becomes a brahmana. In this kali yuga, we see many people who are born in brahminical families eat even meat!
‍
Guru and Krishna work together to help a Jivatma to attain its highest destination. They work so together that the sastras say that if one worships Sri Krishna he gets Sri Guru, and if he worships Sri Guru he gets Sri Krishna. "Krishna Krpa Guru Miley, Guru Krpa Krishna Miley" (CC).

Who is Lord Sri Caitanya?

Lord Sri Caitanya (also called Lord Gauranga due to His golden complexion) is a combined form of Sri Radha and Sri Krishna, stating more correctly, He is Sri Krishna in the mood of Srimati Radha Rani. He comes down from Swetadvipa the highest loka in Krishna Loka (mentioned in the Vedas) and is situated beyond Vaikuntha. Svayam Bhagavan Sri krishna comes down only once in a day of Lord Brahma (4.32 Billion earth years) in a specific Dwapar Yuga (last one happened about 5,000 years ago) in a specific Manvattara, and in the Kali Yuga that follows it, Lod Sri Caitanya comes down. When Sri Krishna comes down, all of His other forms such as Sriman Narayana (Vasudeva form), Maha Vishnu, Vishnu and every one of His other expansions also comes down and attract respective bhaktas in those moods as well. For example, to those who had svakiya bhava (marital relation) never saw or participated in the leelas of Gopis who had parakiya bhava.

Why is Lord Caitanya so Special?

He is so special because He is only one who can give Vraja Prema. It is stated in Caitanya Caritamrta repeatedly, that no other incarnation, even Sriman Narayana who is a Vaudeva expansion of Sri Krishna cannot give this Prema. The reason is that Sri Radha Rani does not come in any other form of Lord Krishna. Also another special aspect of Lord Sri Caitanya is that while Krishna brings mostly Gopis, Lord Caitanya brings mostly the Manjaris whose bhavas are praised as higher than Gopi Bhava.
‍
Rarely enough His form and nature is described in the Vishnu Sahasranama also but hardly anyone in any sampradaya knows the real meaning of that sloka:
‍
suvarna-varno hemango
varangas candanangadi
sannyasa-krc chamah santo
nistha-santi-parayanah
‍
"The Lord (in the incarnation of Gaurasundara) has a golden complexion. Indeed, His entire body, which is very nicely constituted, is like molten gold. Sandalwood pulp is smeared all over His body. He will take the fourth order of spiritual life (sannyasa) and will be very self-controlled. He will be distinguished from mayavadi sannyasis in that He will be fixed in devotional service and will spread thesankirtana movement.” (Mahabharata, Visnu-sahasra-nama-stotra)."
‍
Lord Caitanya Mahaprabhu appeared about 500 years ago in the land of Nawadwip Dham in West Bengal as forecasted in many satras including the one above. So we are extremely fortunate in this life to receive the mercy of Lord Sri Caitanya by the causeless mercy of our Guru parampara running down from Lord Caitanya!
‍
Lord Sri Caitanya is the Yuga Avatar of this Kali Yuga
‍
He is the one who officially inaugurated the Nama Sankirtan movement which is the Yuga Dharma of this Kali Yuga
‍
He came to taste the mellow of Prema Bhakti especially the Maha Bhava which only Srimati Radha Rani possess.
‍
He came down in the form of His own devotee (of Krishna) to teach us abour pure devotion to Krishna.
‍
According to Sri Caitanya Mahaprabhu, except Srimad Bhagavatam which came from Veda Vyasa in his most mature stage (at the end of his life by the special mercy of Narada Muni), Srimad Bhagavatam is the only purana that is currently pure and thus we ever need. All other puranas are not pure due to mix of three modes of material nature and hence should not be followed. He disapproved the false propaganda of Vishnu Purana that Krishna is an avatar. In contrast, Lord Caitanya declared that Sri Krishna who Himself is the avatari where every expansion including Lord Narayana (the Vasudeva expansion) appeared.

In the nine angas of Bhakti as described in Srimad Bhagavatam, Sravanam comes very first. Thus, without hearing about Krishna, i.e. Hari Kathas on His names, forms, qualities, glories, pastimes, his devotees and associates, one cannot got to the next stage which is Kirtan.

When one is well situated with such Hari Kathas, then the Kirtanam (chanting and singing) becomes very effective and real devotion sprouts in one's heart. Otherwise chantings, singings and nama sankirtans are not effective and becomes artificial and turns into another way of satisfying our material senses. So Sravanam is very important.

[The nine processes of bhakti are: Hearing,
chanting, remembering, serving His lotus feet,
worshiping, offering prayers, being a servant,
being dear, and offering one's atma itself to the Lord. ]

All the rituals and fasts associated with a Vedic sacrifice, all the bathing in the holy places around the world, all the penances and fasts of this world, thousands of recitals of Vedic literature, and hundreds of circumambulations of the entire surface of the earth, cannot match even a sixteenth portion of the merit acquired by chanting the holy name of Krishna.

*Krishna accepts offerings only from Laksheshvaras. Maha Prabhu insisted that one should be at least a Laksheshvara.

Unlike other paramparas, where they focus in Karma and Jnana, we should focus only on Pure Bhakti instead. As Lord Krishna says, for such souls there is no debts, no bindings, and no mundane karmas called duties. Every debt is erased!:

Devarsi bhutapta nrnam pitrnam
Na kinkaro nayam rni ca rajan
Sarvatmana yah saranam saranyam
Gato mukundam parihrtya kartam   ... (S.B. 11.5.41)
‍
"One who completely surrenders to Krsna, the affectionate protector of the surrendered souls, no longer remains indebted to the devatas, forefathers, other living beings, kinsmen, or guests. He is not subordinate to anyone, and he is not obliged to serve anyone"

In your home temple, there should be only the primary deitis: Sri Caitanya and Sri Radha Krishna. If you have this, it is the best. You should also have the pictures of your guru, such as Srila Gurudeva, and Srila Prabhupada below the deities, and also a picture of pancha tattva. To support your everyday chanting and meditation, you can have pictures of leelas of Sri Sri Radha Krishna and/or Sri Caitanya Mahaprabhu.
‍
If you have deities of Lord Nityananda and Lord Gauranga instead of just Sri Caitanya, then you should have them in a separate altar, or they should be separated somehow using a partition from Sri Sri Radha Krishna. The reason is the different mood and position of Lord Nitayanda who is none other than Lord Balaram.

And most importantly, do not (repeat do not) keep any photos or things associated with your relatives who have passed away. It is a very serious aparadha. Also do not keep any other deities whatever they may be.Our goal is to serve Sri Sri Radha & Krishna with Ananya Bhakti. Like a chaste wife who has her complete love only to her husband, an anayna bhakta should have complete bhakti to Sri Radha Krishna alone. When we also worship demigods it is called misra-bhakti which we do not want. Even though all the other gods are servants or angas of Bhagavan Sri Krishna, do not keep any such deities in the temple. Many make their puja room like a mall of gods. However if you see other deities, you should give honor and respect but no dandavat pranams to them. Always remember that you belong one and only to Sri Sri Radha Krishna. By serving that Supreme lord, all the demigods are more satisfied than worshipping them separately. Demigods are the angas or branches and leaves of a tree. Only by pouring water to the root (Krishna) every part of the tree becomes healthy and happy.

Your mind should never ever be attracted to siddhis, and hence worshipping any siddhas who display their powers should be completely abandoned. You should understand that any worship you do to any demi-gods actually go to Sri Krishna as the rivers flow towards the ocean. But remember that those worshipper never reach Krishna! They will go only to the lokas of their demi-gods. Krishna says that only those whose intelligence has been stolen by selfish desires will get attracted to worshipping demi-gods. That is a simple psychology.

All the details of temple worship are given in Archana Dipika that you can download from our web. 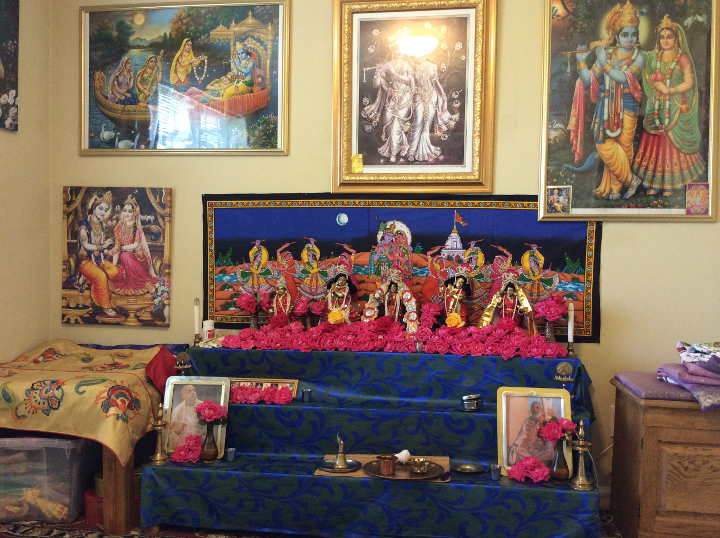